Save 50% off the cost of Remodeling with Cabinet Refacing

or
Fill out a form

Don’t Replace Your Cabinets. Reface Them!
The kitchen is the heart of your home. It’s where you prepare family dinners, bake cookies with grandma, and entertain your friends.

If you choose the right cabinets for your home, they can last for decades. But by the time their lifespan is up, they may look passé and outdated.

That’s where we come in.

JMT Cabinets, your Cabinet Refacing experts in Mount Dora FL offers an efficient and affordable way to update the entire look of any room. Plus, it’s much faster than remodeling your kitchen or bathroom.

If you’re like many homeowners, you plan to keep the existing layout of your kitchen exactly the same but wish to renew and update its look. Cabinet refacing, also known in the industry as cabinet resurfacing, lets you keep your already installed kitchen cabinets intact while completely transforming their appearance.

Refacing your cabinets include reinforcing your existing cabinet frames with a durable ¼” plywood, then a veneer of real wood or maintenance-free laminate is applied over the plywood. Our cabinet experts perform precise measurements to ensure your new refaced cabinet boxes are seamless and color-matched to perfection with your new doors and drawer fronts. The transformation is finally completed with your choice of new hinges, knobs and/or pulls, and molding.

Save 50% off the cost of remodeling

Get the styles and hardware you want

No living in a construction zone for weeks

No living on take outs

We are Mount Dora FL premier kitchen cabinet refacing company. Whether you want to simply update your kitchen cabinets or overhaul the room’s entire appearance, we can help you out. Our skilled experts can breathe new life into your kitchen and bathroom cabinets, restoring them to their former glory.

We treat you like family. Here at JMT, we are proud to be a locally-owned family-run company. That means we go above and beyond for our customers, always ensuring that they are completely satisfied with our work. If you want a company in Mount Dora that you can trust, choose JMT.

“JMT cabinets remodeled my kitchen. They re-faced existing cabinets and installed new cabinets. They were able to transform existing cabinets for example they installed a bank of drawers in a standard base cabinet without having to remove the cabinet. The prices were reasonable. The installers showed up on time and worked efficiently.”
BOB JORETT
“We called JMT Cabinets and after talking to Bruce, we knew this was the company we wanted to go with, a small, family-owned business. We are so happy with our decision! I know why they have a 5-star rating, they did our kitchen cabinets in a timely manner & the crew is very hardworking, courteous, and thorough, taking great pride in their work! We absolutely love, love, love our “new” cabinets!!!”
BARB LEININGER
JMT remodeled our whole kitchen! It is “BEAUTIFUL! Choosing them was the BEST decision I could have made. They did everything they said they would! My kitchen looks like it came out of the pages of a magazine. I highly recommend them to anyone who is thinking of doing their kitchen. Not pushy. Explain everything so you will know what to expect. Thank you to the whole team you all are AMAZING!
Debbie Hamilton

Our detailed process is what sets us apart from the competition. Before we start refacing your kitchen or bathroom cabinets, our experienced carpenters measure each door and drawer, leaving no room for error.

Next, our skilled carpenters carefully remove all doors and drawers. Then, we reinforce your existing cabinet structures with high-grade, sturdy plywood which attaches to the laminate.

Once you choose your new cabinet’s appearance, we carefully install the new wood veneer or laminate. After we install your new pulls, knobs, and hinges, the transformation is complete! Your kitchen will look brand-new, in half the time and at half the cost of a complete renovation.

or
Fill out a form

Cabinets vary in styles! Cabinet doors may feature a variety of materials such as wood, metal or glass. Wood may be solid wood or engineered wood or may be mixed. Here are 4 prominent types of cabinet styles to consider.

A functional design objective for cabinet interiors involves maximization of useful space and utility in the context of the kitchen workflow. Drawers and trays in lower cabinets permit access from above and avoid uncomfortable or painful crouching. 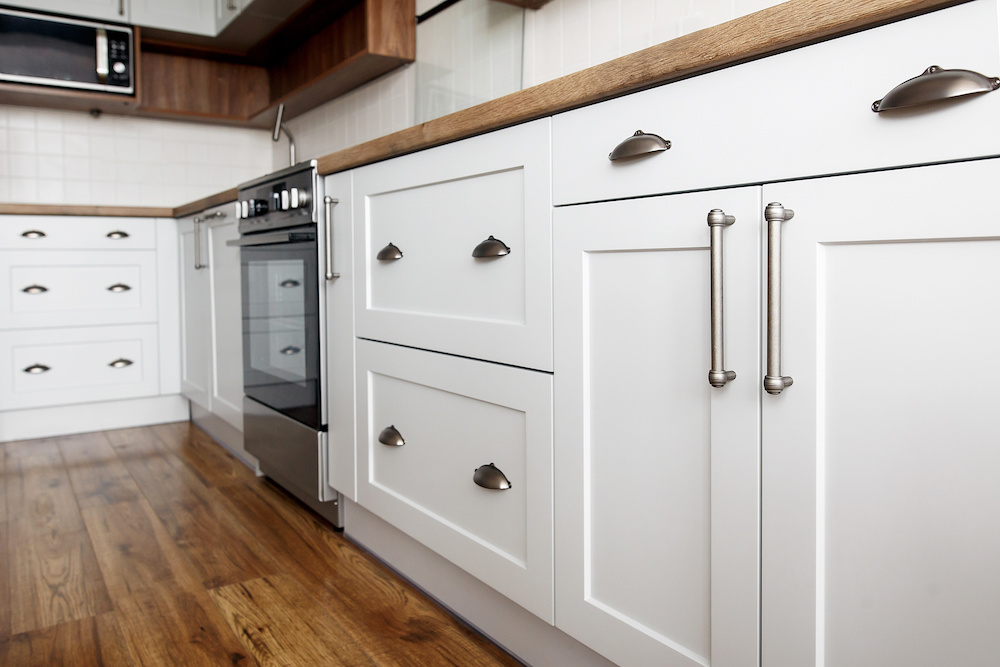 Get a Free Estimate

Known for its Southern Charm, Mount Dora is a small city located in central Florida, in the United States. It is situated in Lake County, about 35 miles northwest of Orlando. The city has a population of around 13,000 people and is known for its historic downtown area, which features a number of antique shops, art galleries, and restaurants.

Mount Dora is located near several lakes, including Lake Dora and Lake Gertrude, which offer a variety of recreational activities such as boating, fishing, and swimming. The city is also close to the Ocala National Forest, which is a popular destination for hiking, camping, and other outdoor activities.